Sincere thanks to all for this successful and enjoyable event from FLIC, Carn to Cove and CFlym.

Attendance was in the high 30s, including reps from Looe, Chudleigh, Launceston, Tiverton, Topsham, Ponsanooth. The event was very well received with delegates enjoying themselves.

The photos show the large hall 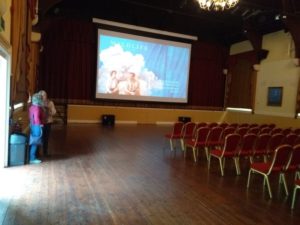 and the atrium where we found lunch overlooked by a mural of the famous Cornish poet Charles Causely. Fantastic food – many of the delegates now want to know the secret of making such fine quiches. 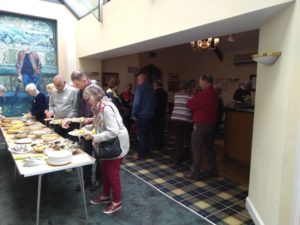 Programming note – Shoplifters was shown in a small hall and Green Book in the large hall – should have been other way around.

Shoplifters 89%
Quite good, but too slow in places and left too many facts not explained clearly. Good acting and beautifully filmed.
A remarkable film thought provoking and moving with so many different layers. A film that will stay with me forever.

The Guilty 93%
Great acting.
Superb.
An ‘on the edge’ of your seat thriller. Lots of twists. Very clever.
Who dunnit heaven – Smart, Scandi noir. Best film of the day in my opinion.

Faces Places 84%
A very interesting collaboration and a particularly creative outcome as a result. A tender relationship worth witnessing.
very slow a good film especially when the photos were revealed, but too much in-depth dialogue to hold our audience.

As you will see from the above The Guilty was extremely well received and was the most popular film shown at Launceston, with Shoplifters snapping at its heels. The least well received film was, by quite a margin, Wildlife.